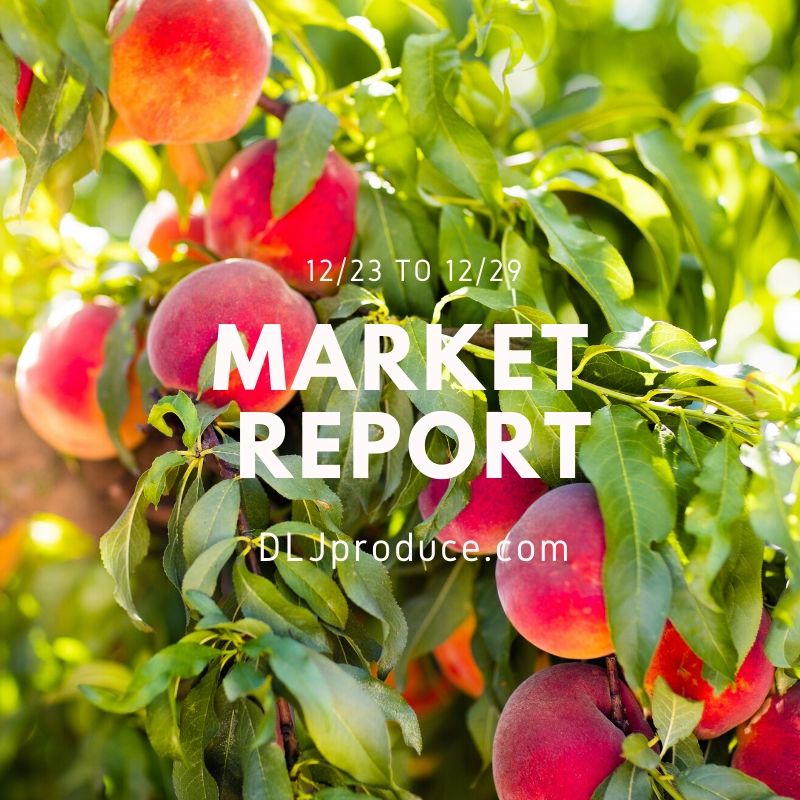 The red grape market is at a watershed moment. The last fruit from California has been harvested and is being shipped off inventory. Quality is waning and overall volume is lower than 2017 and 2018, helping to keep the FOB market stronger here at the finish. Instead of stretching into late January like last season, most growers are either already done or finishing a month earlier. This will keep demand high for any good quality fruit that remains. The other issue is the lack of import arrivals. Both coasts have only seen small amounts of fruit from Peru and Chile so far, light on the front end due to a combination of a late start, drought conditions and replacing older varieties with breeds still in transition. Demand on imported reds, especially on the East, is demand exceeds. FOB pricing continues to firm and look to reach a record high, possibly outpacing green. Retailers should look to hold off on promoting in January and try to stay in available CA fruit as long as possible until import volume starts. Expect a high priced market in January.

Only very small amounts of green seedless from California remain. Autumn King and Autumn Crisp are out of volume and cleaning up fast. Quality is iffy at best. Import greens have begun to arrive on the East Coast from both Peru and Chile but will remain very limited on the West due to lack of vessel arrivals. FOB pricing will slowly adjust to the East, but demand and lack of fruit on the West will keep pricing higher due to additional freight costs. Expect limited supplies the rest of December, with better volume in January once Chilean fruit arrivals. Overall, the crop looks to be short this season due to droughts in Central Chile. Retailers need to limp through on high priced greens for the next 4 weeks, and then expect some promotable supplies starting in February.

Black seedless is a wrap out of California, with only pallet quantities remaining. The import deal has started in a very light way on small volume proprietaries but has not really gotten off the ground. Only pallet volume will be available, with no official import arrivals until mid-January from Chile.

California red globes are done for the season. Retailers should jump into imported globes from Peru, if not already done. Quality is strong and FOB’s are stable, even if the volume is only moderate at this point.

The yellow peach crop has started and will remain small in fruit size and volume. The fruit is peaking on 52/56’s and smaller but will slowly increase as we get into better varieties in mid-January. FOB’s will slowly adjust, mainly due to a lower amount of interest on early fruit that is typically tippier and has a shorter shelf life. The volume will increase going into January, but the effects of the drought on volume and size in southern Chile are yet to be seen. Now is the time to start carrying, but hold promotion volume until mid-January. White peaches not expected until the first week of January.

A very small amount of yellow nectarine has arrived, but not enough to bat an eyelash at so the season really hasn’t kicked off. Some increased container arrivals are expected next week, but the size is a problem and peaking on small volume fill. 54/56’s and larger will get a premium FOB simply due to lack of arrivals. Hold off on promoting until mid to late January due to the late start and lighter volume at the onset.
Plums – The first arrivals of red plums have arrived on both coasts, peaking on 50’s and 60’s. Quality will be average, but Brix will be borderline at the start. The season will kick off in light volume and build momentum. Black plums are still at least 3 – 4 weeks away from arrival start. Promote reds in a light way, ad volume on both colors not until late January. The size will be a concern because of the drought, expect sizing to peak on 50’s and smaller with a fair amount of small plums hitting the market but creating a demand-exceeds market on bigger fruit.

Volume has resumed on clementine harvest after early December rains, with good supplies of clems coming from the field in a range of sizes. Brix and natural color are hitting their strides to eliminate gassing needs. Rains this coming week will slow down or stop harvest, but growers are looking to harvest ahead into bin back and hopefully avoid a gap in supplies.

Navel orange volume is hitting its stride. Due to natural color and brix, along with some rain pushing size, overall harvest size has moved into mainly 56’s and 72’s. 113’s and smaller will begin to become limited. Gassing is either no longer needed or very minimal due to cooler weather and fruit maturity. Rains this week will slow harvest, but enough fruit should be picked into bin backs to fill the holes and not allow a noticeable gap in supplies.

Our entire team at DLJ Produce wishes a happy and healthy holiday season. We always like to keep you updated on the latest happenings and bring the finest, freshest produce all year long.

Got a question or a comment? Give us a call, we love talking to our customers.