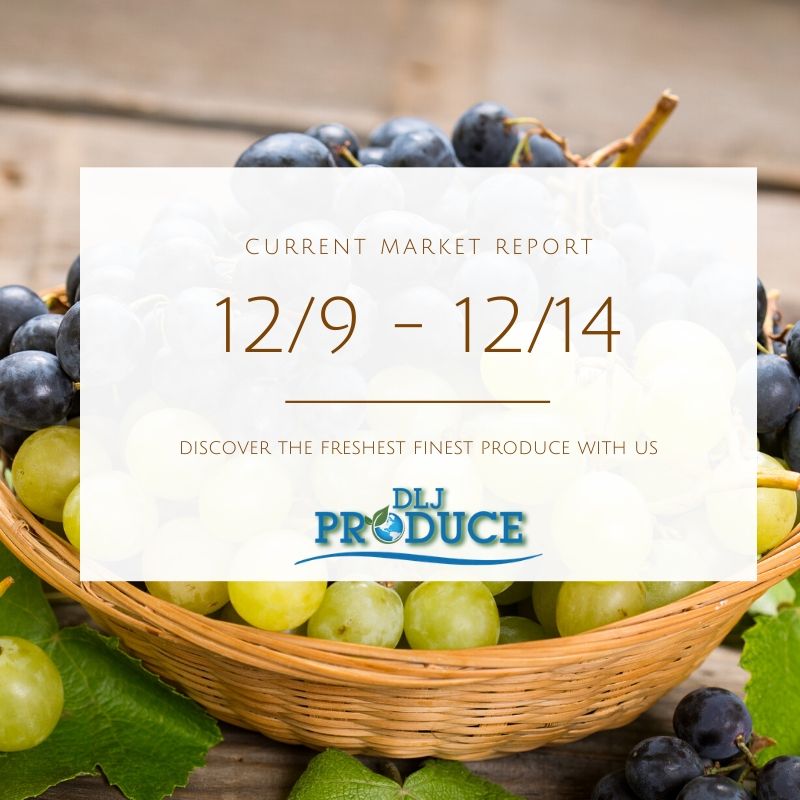 DLJ Produce, home to fresh produce such as tree fruits, grapes, nectarines, citrus produce and more is always eager to keep you updated on the latest happenings in the field. Here is the produce market report for the first half of December 2019.

Red grape harvest has finished in the field for 2019, with growers having made final field passes. The fruit remaining for the season is either already packed on inventory or packing fresh in-house out of totes.

Quality is average for this type of season, with some good lots and some lots showing typically December concerns.

Be careful on quality as we are at the end of the season and fruit will be stretching to reach the finish line. Crop volume is down this season on reds, mainly due to May rains affecting set, as well as new plantings not in production yet. California fruit will struggle to stretch into mid to late December if the quality holds. FOB’s will strengthen on good lots. Look to jump into imported fruit as soon as possible in late December.

First imported reds will start on the East Coast next week, but the West Coast will be behind with a late December / early January start on any true volume.

The California green grape deal is done. Very limited supplies remain, and what does remain on inventory is showing quality concerns. Autumn Kings had a rough season due to low field pack-outs and quality.

Expect the last supplies to clean up this week, but not in any shippable volume. FOB pricing for late CA green has reached a record high this season, due to low inventories and high demand. East Coast retailers have already begun the transition into Peruvian green seedless. The volume will be very limited in December, especially to the West Coast, so FOB’s will remain high to quell demand. Expect a small gap on the West until imports begin to arrive in better volume with Chile in January. Peruvian fruit will be limited and high priced.

The black seedless crop out of California is done, based on quality. Only a few small lots remain to finish out the season. As retailers pull the plug, the first Chilean arrivals are expected in late December on the East and mid-January on the West. Expect a small gap until import volume catches up and allows for black grape mixers.

Only a few lots remain on California red globe for domestic use. Quality has ruled out any more exports of red globes oversees. Peru will continue to pick red globes in good volume and ship to the U.S. (mostly to the East). Quality on imports is much stronger than anything remaining in CA. Now is time to make the switch into imported red globes that will carry from now through May 2020.

Rains have slowed down harvest this week, but most growers will look for opportunities to get out there and continue harvest on clementine varietals. Crop volume looks good and cooler weather has brought on natural color. Recent rains and upcoming storm fronts should not affect the overall quality, but will slow down harvest and may see some small availability gaps until crews can begin harvest again in earnest. Continue promoting through April this season.

Navel oranges will see the same woes. Crop volume has been good so far, but recent rains have slowed down harvest and cleaned up inventories on bin backs in the cooler. Expect to see lighter supplies available over the next 7 days just because of the weather factor. Fruit size has picked up and is now peaking on 72’s and 88’s, with a fair amount of 56’s. This will continue to pick up a size with more rainstorms. Promote in a light way now, with good supplies expected into May

DLJ Produce is home to fresh tree fruits such as cherries, apples and more. Rely on us 365 days a year for the finest and freshest produce available on the market.

Cherries will continue to arrive at the U.S. by air flight for the next two weeks, with fruit flying from both Chile and Argentina both. Quality has been good so far, with consistent enough supplies to allow retail to start carrying this season. FOB’s have gotten to their lowest reasonable point for air flight, considering air freight costs. Pricing should be stable through the remainder of the air flight crop. First container arrivals of cherries to both East and West aren’t expected until around 12/20. Once containers arrive, FOB’s will drop to a promotable level. Hold high retails for now until promotable volume comes and allows for more aggressive promotions in January.

The first yellow peach arrivals have hit both coasts, with a very limited supply arriving to start the season. Fruit is typically small (mainly 52/56’s and smaller) and has a very elongated tip, at the start of the season. We will move through early varieties and then see slightly increased volume by the middle of the month. The promotable volume will not hit on either coast until January, so carry in light volume for now and hold promotions until the start of 2020. White peaches will start harvest and first arrivals will be late in December. Crop volume looks to be slightly affected by the drought in southern Chile, so this may affect crop size/fruit size.

The first nectarines of the season are still a couple of weeks out. First arrivals are expected to hit around 12/18 to both coasts. Similar to the peach, expect smaller sizes and light arrivals until we get into the heart of the crop in January and February. Total crop volume in Chile will also be lighter due to drought conditions. Hold until promoting in mid-January.

The first arrivals of red plum are expected by mid to late December. FOBs will start high and then get to promotable levels by late January.

Some Chilean arrivals by air shot. Quality is good, but FOB’s remain very high per lb due to air flight cost. Supplies will carry into January and FOB’s will drop once vessel apricots arrive. Carry in mixer supplier for now until stable volume arrives on vessels.