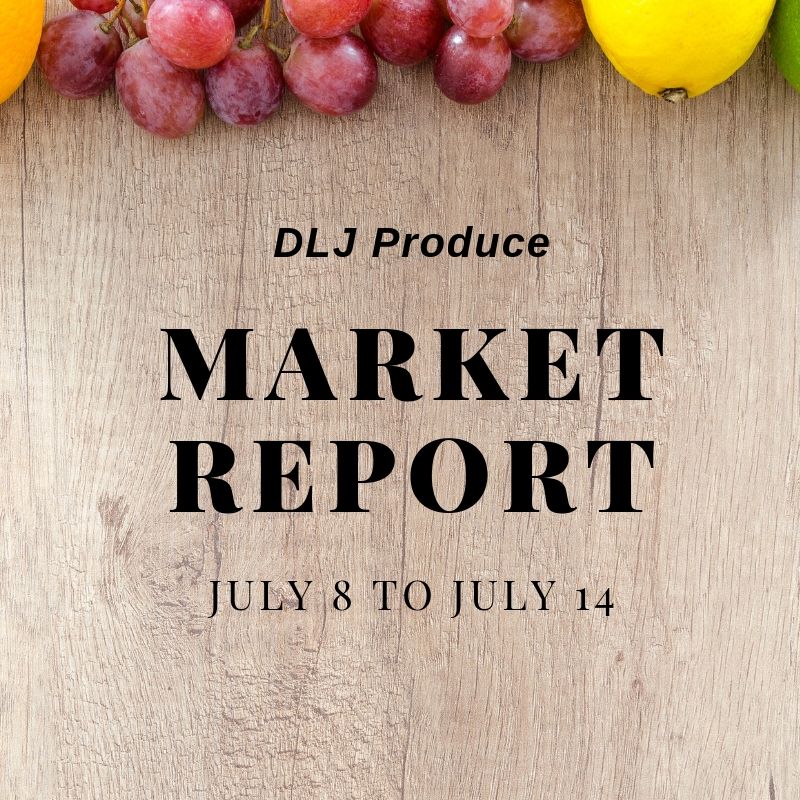 We have reached the tail end of the red grapes crop in Mexico and Coachella. Coachella’s has finished with Flame seedless and Mexico has picked its last fruit, working off inventory. Some older pack dates remain in the system, keeping FOBs at a low level. Supplies will slowly clean up over the next week as Central CA begins harvest. Some specialty varieties like Passion Fire and Sweet Celebration will continue to harvest in Mexico for the next 7 to 10 days and allow for some shippable supplies of premium reds into mid-July. Expect FOB’s to slowly firm for premium varieties as Flames finish. The safe move is to transition into fresh harvest Central CA Flames starting the week of the 7/15.

The green seedless market will remain aggressively priced out of both Mexico and Coachella due to large harvest volumes and lower retail movement. FOBs have sustained a lower than average level, but mainly affected by poor quality, older fruit remaining in the system. This split market has left a concern over quality. Supplies of fruit from Mexico will carry for the next 2 weeks, but it is important to load the best, freshest fruit with the right FOB’s. QC at shed level will be very important to keep grapes moving through the system, instead of retailers abandoning for fresh harvest fruit starting in Central CA.

The last of the Summer Royal crop from Mexico are hanging on for another 7 – 10 days, with growers finishing harvest and shipping the last of inventories. Quality has remained good and FOB’s have remained higher than the red and green market. Expect supplies to carry through this week and then transition into Central CA harvest that will just be starting.

Mexico will continue harvesting Red Globes in decent volume and have supplies through most of July. Expect this to carry up to the start of Central CA going into August. Logistics will be the only issue, having to consolidate from Nogales to the fresh growing regions.

We are on the last week of California apricots, but good volume still remains. 2019 brought one of the larger crops in recent years and brought FOB’s to a bottom in late June due to slow movement. CA will finish and allow a smooth transition to the harvest volume arriving in Washington.

yellow nectarine volume has remained steady, but not in any supply exceeds volume. Fruit appears to be moving through the system well and keeping FOB pricing stable. Growers continue to fight the effects of early June and pack-outs continue to be lower than expected. Varieties have moved into the bulk of the sub-acid fruit, with Honey Blaze starting harvest, coming off the heals of both Springbrite and Summer Flare. Continue to promote, with the best volume of the season expected to peak in August.

CA yellow peach movement has been lackluster so far, competing against local crops in other parts of the country. We are in the peak of the harvest with both Spring Flame 26 and Sweet Dream being harvested. Quality is good, with some signs of staining and brown rot, but mostly under control and in good shippable quality. FOB’s remain at a low level, causing some growers to begin diverting fruit to the cannery to keep volume under control. Promote, promote, promote through July, August and September.

White nectarine volume has been light this week, with only small amounts of Majestic and Candy Pearls being harvested. Low pack outs have also affected volume. Expect Fire Pearls and Red Pearl to stat by the end of the week and hopefully bring on increased harvest volume. FOB’s will remain higher than other commodities simply due to less fruit in the pipeline.

White peach will come out of a light week as well, with Summersweet variety only producing light numbers. Expect this to slowly increase in volume if pack outs clean up and growers see less staining coming from the field. FOB’s will remain consistent, especially on large tray packs that are seeing good demand.

The plum market has remained in good shape, with a glut of volume not plaguing the industry yet this season. Growers are holding their own, picking Hiromi red plums and Owen T black plums currently. The red market will stay firmer, but expect the black plum FOB’s to dip slightly by the end of next week as more Owen T variety come into production. Mid-July is typically when we see the largest plum volume of the season. Promote black plum in the second half of July, and then expect both colors to remain firm on FOB’s in August and September.

The import clementine market has seen good demand this season, with supplies from Chile and other regions being down an average of 18% compared to 2018. Quality has remained strong, but the lighter volume of arrivals in June has helped to keep FOB levels higher than last season. Demand on 4 sizes and larger have been good and look to remain that way and keep the market stable. Expect to start seeing a volume gap in mid to late July as the clementine arrivals wind down as harvest finishes. The promotable volume will resume in mid-August as the W Murcott variety hits in volume and provides good supplies in line with 2018. Continue to carry, but hold big promos until Murcott variety is promotable.

The navel orange market is off to a slow start. Only a small amount of fruit from Chile and South Africa has been sent to the U.S. so far, with a majority of it going to the East Coast. Only a small amount of Chilean product has arrived in the West. Slowly increasing harvest will bring better arrivals of fruit to the West for the week of July 15th, with the first promotable volume expected to hit in early August. Hold promos until arrival volume begins to hit. 48’s and 56’s are expected to be limited at the start, with most arrivals hitting in 72’s and 88’s.

DLJ Produce is your year-round supplier of fresh, fine produce from local and international sources, learn more about our history and contact us with any questions you have.