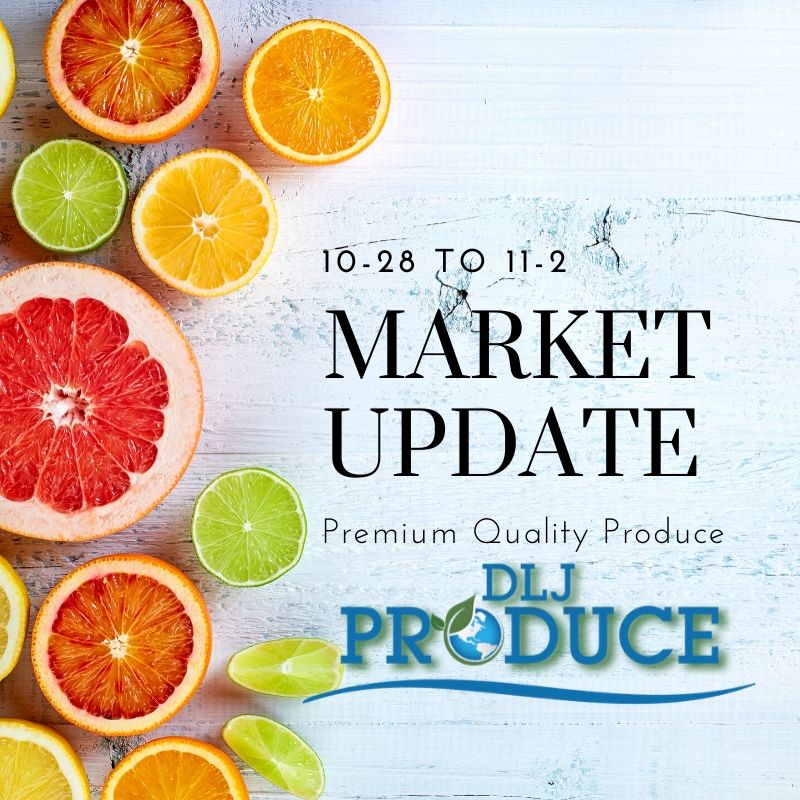 They have reached the peak for the season and we are now on the steady decline during the last month of harvest.

The heaviest volume of the season has been able to make its way through the system with decent ease and allowed for good movement so far.

FOB’s still remaining at a season-low due to volume on inventory, but there is a spread between average fruit and fruit that is deliverable to middle of the road customers.

Quality is generally good to very good on high-end premium varieties, but lower-end fruit has shown some arrival issues.

Harvest of Scarlet Royal grapes will slowly wind down, with the Allison being the main late-season variety left to pick through. Expect supplies of red seedless to stretch into most of December, but FOB’s will slowly firm based on quality and decreasing harvest volume. Continue to promote.

The green seedless crop is lackluster this season. May rains created a tough environment for all greens, but mainly late-season Autumn King that are susceptible to mildew scarring.

Pack outs have been lighter than estimated all season, due to the amount of work required in the field to pack a deliverable box. That, in turn, also decreased crop volume and overall inventories going into November. Green supplies around roughly 1 million cases lighter than this point in 2018. FOB’s will continue to firm on good fruit as growers anticipate a tight/short market in November and December.

Avoid running CA greens too late, as supplies will finish out early and most retailers are expecting to jump into imports by mid-December. Peru is anticipating early December arrivals to the East and may help take the pressure off the lack of remaining crop volume from CA.

The black seedless market is similar to the green market, with a general lack of volume in the field and quality becoming a concern.

Autumn Royal will continue on harvesting, but not in the volume seen in years past due to the light set. That will slowly raise FOBs as harvest winds down and carry good demand going into late November. Expect the market to clean up relatively quickly in early December due to both factors.

Red Globe – Red globes will continue to plug along, but in more demand than past seasons due to the drastic decrease in producing acreage. The digging out of red globes to replace with seedless varieties has created a shortage of good fields here in California, as well as kept FOB pricing much higher than the historical average.

Harvest will wind down soon and supplies will carry into late November. Peruvian globes have already begun to arrive on the East to support retailers in demand of strong fruit.

The import citrus season was expected to be finishing by now, but some supplies still remain to arrive on the West Coast with late Chilean murcotts.

This has forced FOB’s lower on the West than the East, in competition with the start of the Satsuma mandarin crop in California. Importers look to clean up the last of their arrivals in advance of clementines beginning in earnest in CA, as some retailers are reluctant to jump into Satsumas and still prefer late clementines.

The market will remain volatile due to the crossover of growing regions, but Chilean fruit should finish shipping by the 1st – 2nd week of November and allow for a free pipeline to the start of CA.

The import navel orange market has cleaned up relatively well, with most importers either finished or finishing on the last of their Chilean navels. Quality is typical of late-season fruit and most are just looking to clean up for the season.

Expect the crop to finish within the next few days. California is very very late and slow to the start. Due to May weather, crop start has been pushed back 10 – 14 days with most. Size is also an issue, with fruit peaking 113’s and 138’s on the few growers starting the harvest. 72’s and larger will be very tight at the start of the season.

Expect supplies and FOB’s to free up by late November once more shippers begin harvest.

Our goal is to always keep you updated on the latest happenings with our company and our nationwide produce supply capabilities.

Got Questions? We enjoy talking to our customers, contact us with any questions or comments you may have.