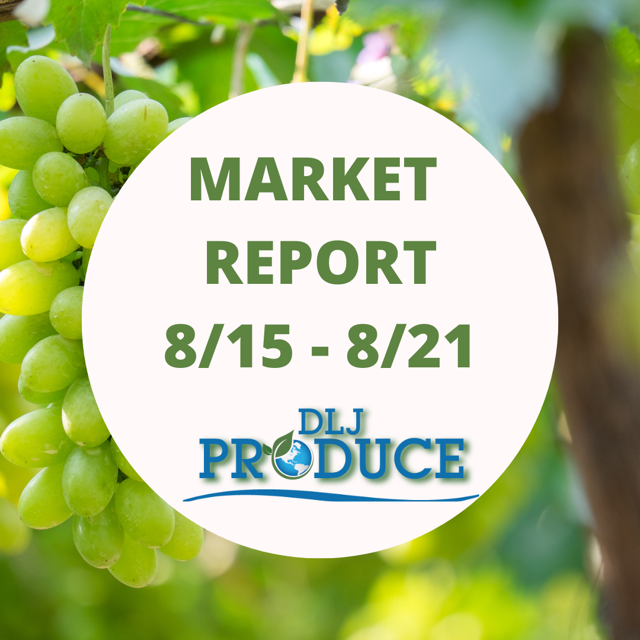 Flames will see their final hurrah, as we transition into a new variety. Expect size to start peaking on XL and J, with limited amounts of L code. Scarlet Royal, Magenta, Krissy, and Jack Salute will take on a majority of the volume in August and September. After a small variety transition, expect good volume to start slamming out of the field and allow for good promotions in late August through November. Even recent rains don’t look to have put a damper on the crop and we will see plenty of promotable volumes.

Green seedless will continue to throw volume as growers finish out their Ivory and Sugraone but move into Timpson, Sweet Globe, and Valley Pearl varieties. A good volume of M/L and L code will continue to plug up the pipeline with average fruit. True export quality will continue to demand a premium on extra Jumbo fruit. Quality will remain strong and rains look to only have limited effects so far. Continue to promote greens until the cows come home in late November / early December.

Midnight Beauty and Summer Royal will make up the largest current harvests of black seedless. We are only a few weeks away from the start of Autumn Royal that will bring the largest volume of the season. Expect FOB pricing to remain stable. Sweet Sapphire elongated blacks are harvesting as well, in a separate PLU code.

California is starting to ramp up harvest on Red Globe grapes. But volume is a fraction of what it used to be on current producing acreage. FOB pricing will remain much higher then seedless varieties all season, due to limited crop production and demand for export markets.

Rains dealt a problem to the peach crop last week. Yellow and white peach pack outs dropped by 60 – 80% in spots due to rain damage and staining. Hopefully this week’s varieties will see it work its way out of troubled lots and see pack outs pick back up. Demand remains high as the East finishes and local crops in other states are limited. Expect high FOB pricing to carry the peach crop into October, with good movement keeping inventories clean.

August varieties of nectarine will continue on, but like peach, see some of the staining and pack out loss due to the surprise rains in the Valley. This will bring production down for 7 – 10 days but there should still be enough late varieties to allow for a few more weeks of harvest. Expect supplies of both white and yellow to carry into the 2nd – 3rd week of September depending upon movement.

Rain will bring plum production down and may adversely affect the back end of the plum and pluot crop. With that being said, there are still plenty of varieties to go before crop finish. Overall harvest volume has been down originally, prior to the rain, and has kept FOB pricing at a record level. Expect that to remain the same the rest of the season. Pluots will start slowing down by late September. Expect the last black plums to reach into late October pending movement.

Chile continues trending 35% lower then last years import volume same time period. Once the Peruvian and Uruguayan crop moves through the system over the next 3 – 4 weeks, expect to see a drastically short market on the back end of the import season. This will help strengthen FOB on the Chilean Murcott crop. Avoid promotions in September and October, as the Chilean freeze greatly affected the Murcott crop that arrives during that time period.  A late September / early October decrease in volume will take full effect, firming FOB’s higher and may create a gap period before Central CA start.

The orange crop has finally started to arrive from Chile, but with a combination of light volume up to this point and crop volume down roughly 10%, demand remains extremely high. The increasing arrivals of navel should bring some slight relief. Arrivals will peak on late August / early September and help to bring costs down slightly, but still nowhere near historical averages. Quality will peak on 56’s and 48’s moving forward. Avoid large promos, but availability will be there for the next couple months to fill the hole.

Lemons may shape up to be one of the tightest crops of all. Chile accounts for a majority of the lemon imports into the US, with Argentina and Uruguay bringing smaller volume. Chile is currently trending DOWN 29% over 2021 total volumes. And this number will likely increase moving into September as the freeze has already stopped some farms for the season, with a record early finish to harvest. With moderate supplies currently, the availability is expected to switch quickly and limit arrivals on the back end of the crop. Expect imports to finish early and have retailers pushing to get new crop volume out of CA as soon as possible.