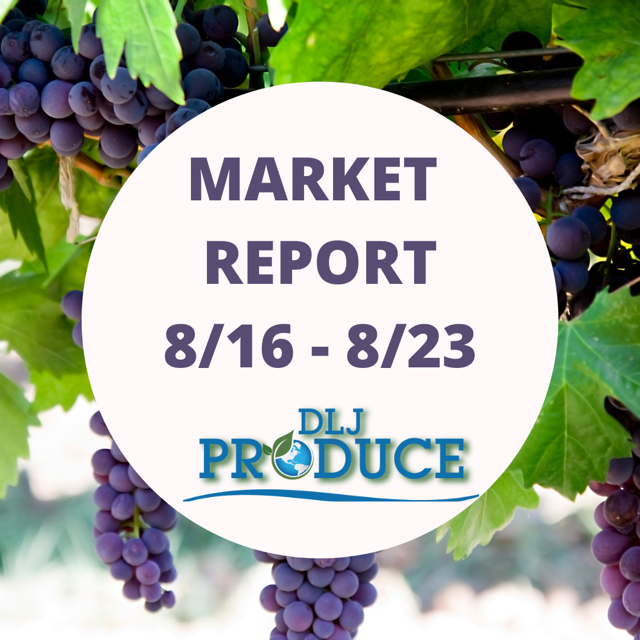 The last two weeks have been a little rough on red seedless. Supplies have been available, but in decreasing volume as Flames wind down. Growers anxiously anticipated the start of Krissy seedless and Scarlet Royal to kick back up on volume. Color has been a little slow in the field due to the consistently high temps over the last two weeks. Harvest will finally start to pick up and bring some volume out of the field this week, with supplies increasing and starting to build by the start of September. Expect red promotions to kick in in September and October, flipping with the green.

Good volume remains on green seedless, with Ivory and Valley Pearl still picking in volume. Timpson is right behind, with Autumn King slated for a mid-September start. Now is the time to promote, with good volume and promotional opportunities available. Once Ivory and Valley Pearl start to wane on volume over the next 2 – 3 weeks, we MAY see a tightening of the market if Autumn Kings are still holding off due to heat. This could strengthen FOB’s to match demand and cause the green market to flip with the red seedless on the most promotable. Be wary of a tightening supply chain going into September possibly.

Summer Royal will continue for a few more weeks, with Sweet Sapphire / Moon Drop also starting. Autumn Royal is right around the corner and will bring an increase in quality to the black crop, but they were also glanced at by heatwave damage that may affect crop volume. Once Autumn Royal start, expect black grape supplies into at least November.

Wow, red globes remain tight. And it doesn’t look to change as limited supplies are harvesting and demand is strong for the small amount. FOB’s remain extremely high and firm due to demand. More fruit will come online going into September, but it may still not be enough to move the needle. Pricing looks to be the highest all season for red globes compared to the three other colors. Avoid promos, FOB’s will keep Red Globe as a niche filler item.

The peach crop will continue on strong with good supplies, but the harvest last week was off 25 – 30% due to some heat damage and field concerns. Quality is strong, but the movement is also good and keeping growers current with an inventory. We are not seeing the glut of supplies that typically plagues the industry this time of the year. Expect FOB’s to increase by the end of the month to facilitate the late peach deal in September – October and the decreased total volumes as growers finish for the season and leave the October crop in the hands of only a few growers.

The nectarine deal has started to turn around. The last few weeks saw a mountain of yellow and white nectarine harvested, but the movement has been good and been able to chip away at supplies. Deals are still available in both colors and remain in better supplies then the peach inventories. But… we are nearing the end of the crop. Harvest volume will slowly start tailing off over the next 2 – 3 weeks and this will help move through the current inventory pile. FOB’s are expected to perk up in September as we approach the crop finish that is slightly over a month away.

With Owen T finishing, the industry is left with a hole in black plums. Black Kats and Angelino are right around the corner, but the crop looks to be a little light due to heat damage and crop set. The biggest issue will be the size. We will see almost no 30/35’s and limited 40/45’s going forward, with Angelino’s expected to peak on 50/55 size fruit. Retailers will need to adjust size specs to stay in black plums in late September and October. Red plums are having slightly better success, with September Yummy and Honey Punch starting. The size will remain stronger on red plum, especially once we move into Flavor-Fall in September that throws massive-sized fruit for the tail end of the crop. Pluots will continue on, as we reach the end of the Dapple Dandy / Dino Egg crop. But specialty varieties of all colors will follow and allow for pluots into early October.

The clem market is in a state of flux. Volume arriving from Chile, Peru, Uruguay, etc. is good in comparison to previous seasons, but the problem is the volume lost while packing here in the U.S. Chilean fruit has especially been troubling, with a significant amount of quality concerns around the industry. Even with good inbound arrivals, additional repacking loss when bagging has created a snugger then normal environment for this time of year. FOB’s are firming slightly as importers realize their volume will be off. Clemenules are being dumped in favor of new varieties, but not enough Murcott has been picked yet. Hopefully, once the clem to mandarin transition takes effect, we see better quality and pack-outs on the Murcott crop. Time will tell… but the industry will remain in flux up to that point.

The navel market remains extremely limited, especially on the West Coast. Chilean crop volume is down around 25% year to date and has created a domino effect. On top of that, the arrivals hitting the West are still peaking on 72’s and 88’s, with 64’s and larger being very few and far between. Demand greatly exceeds supplies. On top of that, port delays have slowed availability due to a lack of releases, further compounding the issues in the industry. Be weary of navels and avoid ad promos until something changes hopefully in September.

The lemon market remains relatively stable and much higher then in previous seasons. This is mainly due to the same issues affecting navels. Crop volume is in line with historical averages, but the container releases from the port have been unreliable. 95’s and 140’s remain in best volume on the West, with 115’s intermittent in arrivals. Continue to promote lemons, but expect FOB’s to remain firm as demand keeps up with arrivals.