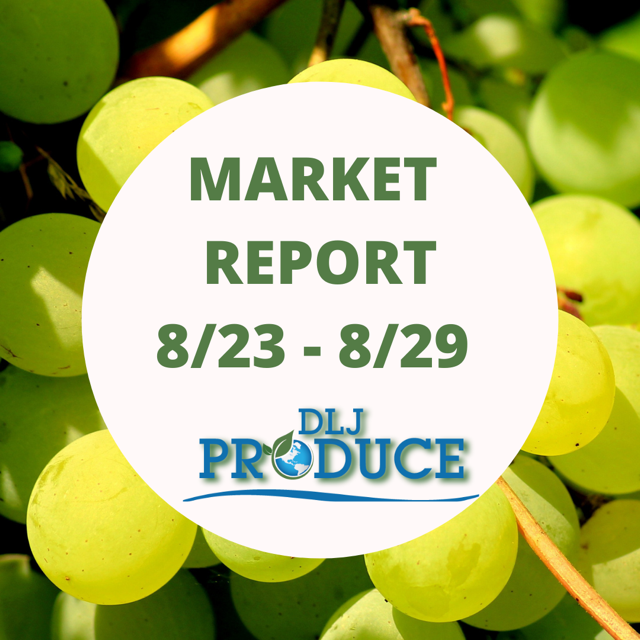 Red grape volume has remained lighter over the last 10 days, as Flames are finishing across the Valley, inventories have cleaned up and growers have just started to harvest Krissy and Scarlet Royal. But volume is coming and the transition will be on us quick between field volumes. Expect red seedless to pick up on volume, baring some decrease due to heat damage, and allow for good promotional volume going into mid-September through November. The size will peak on L and XL-sized fruit, with new varieties throwing very limited amounts of a value pack. Scarlet Royal will bring on the biggest volume as we move into September.

Heavy volumes still remain on green seedless inventory, spurred by multiple varieties picking at the same time and growers having to move crews into green fields as reds gapped. Expect good supplies to carry for the next 10 – 14 days into mid-September, but availability may flip between volume on reds and greens. Once Ivory and Timpson are moved through in the industry, all that will remain in volume for the season will be Autumn King, Pristine, and Autumn Crisp. This may create a slight firming of FOB’s by mid-September as volume starts to slow down from its earlier peak. Keep promoting for the time being.

Summer Royals are finishing with the season, with grower cleaning up inventory. A small amount of Midnight Beauty is packing around the Valley, but most growers are experiencing a gap for a small amount of time until Autumn Royal starts picking around the first week of September. Black grapes will remain but in a lighter volume. Avoid heavy ad promos until Autumn Royal arrives.

En Fuego. The red globe market stays tight and high-priced due to lack of acreage. FOB’s on the red globe look to continue to trend higher than any of the seedless varieties. Harvest is slowly picking up, with some additional growers starting, but it still looks be strong for most of the season.

Continue to push on yellow peach. Quality is strong, but the movement is also good and keeping growers current with an inventory. We are not seeing the glut of supplies that typically plagues the industry this time of the year. Expect FOB’s to increase by the end of the month to facilitate the late peach deal in September – October and the decreased total volumes as growers finish for the season and leave the October crop in the hands of only a few growers. White peaches are coming out of the variety gap and look for one more push before the crop finish in mid-September.

The nectarine crop has started to clean up from the glut of fruit seen over the last two weeks. Both yellow and white nectarine have seen better movement and less field production, allowing inventories to catch up. Still, good supplies of fruit remain available. August Fire and August Red will make up the largest volume of yellow nectarine left to harvest. Both colors have a few more weeks of the big push in them on harvest before growers start winding down in early September. Expect most of the crop to finish by mid-September, with only a few late white nectarines stretching to the end of the month.

With Owen T finishing, the industry is left with a hole in black plums. Black Kats and Angelino are right around the corner, but the crop looks to be a little light due to heat damage and crop set. The biggest issue will be the size. We will see almost no 30/35’s and limited 40/45’s going forward, with Angelino’s expected to peak on 50/55 size fruit. Retailers will need to adjust size specs to stay in black plums in late September and October. Red plums are having slightly better success, with September Yummy and Honey Punch starting. The size will remain stronger on red plum, especially once we move into Flavor-Fall in September that throws massive-sized fruit for the tail end of the crop. Pluots will continue on, as we reach the end of the Dapple Dandy / Dino Egg crop. But specialty varieties of all colors will follow and allow for pluots into early October.

The clem market is going into the end of the month extremely short on supplies due to a combination of factors. Pier delays have created inconsistent supply, along with clemenules finishing and waiting for W Murcott to start arriving in volume that is still 3 – 4 weeks away. Repack losses are significant on both Chilean and Peruvian fruit due to quality, limiting the amount of fruit in the system available for day-to-day business. Expect supplies to remain short for a while and avoid promoting clems in volume until Murcott brings increased volume in September.

The navel market remains very limited, especially on 64’s and 56’s. Size continues to peak smaller, with good volume on 88’s. Demand is keeping larger sized cleaned up and relatively tight. Luckily, increasing arrivals are expected at the end of August. This may help take some pressure off larger fruit and at least allow for some supplies of navels to be available. Expect FOB prices to only adjust slightly once arrivals hit, as demand is expected to remain strong.

The lemon market remains hot. Due to a combination of lack of domestic and good demand for the product, imported lemons are seeing a strong pull so far this import season. Reports on FOB’s show this season being the highest-priced returns back to South America in the last 5 years. Expect FOB prices to remain high and stable due to demand moving fruit through the system, especially on 115 and 140 count. Smaller foodservice sizes are struggling a little, but no change is expected on bigger fruit and expected to move quickly.