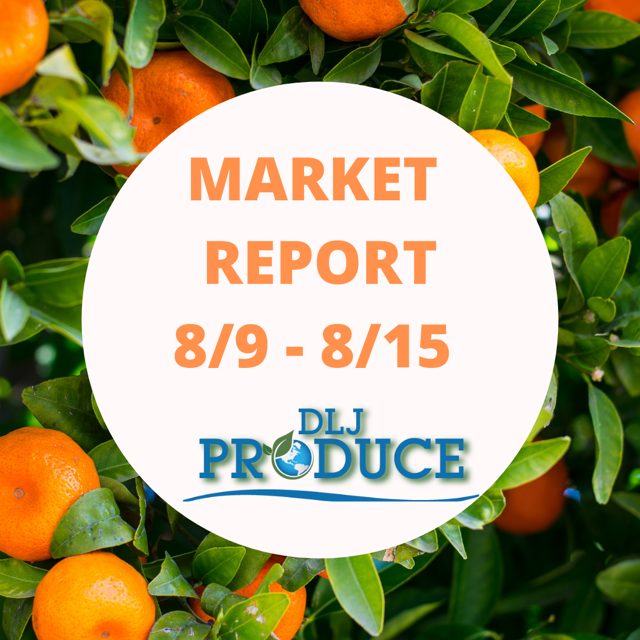 The red grape crop will finally come out of its harvest hole this week. Volume has been light on harvest the last 10 days as growers finish their last picks of Flames and wait for both Krissy and Scarlet Royal to color up. The first fields of both varieties will start scratching this week and volume will build as more color comes on and Central CA starts harvest by mid to late April. Expect supplies to still be lighter on the front end of the week, with a firmer FOB, then see increasing volumes. Promotions will be amped up for the week of August 23rd to start pushing red seedless again.

Good volume over the last 14 days, with a combination of Sugraone, Valley Pearl, and Ivory. New varieties are picking out fast and with good size. This has created a swelling of inventory with good supplies to promote at an aggressive FOB. Continue to push on green seedless as this will likely be the peak volume of the season. Due to the lack of reds and crews picking heavier in green, we MAY see a green grape harvest gap later in August. Supplies may start to lighten up by the end of the month and see less promotable volume until Pristine and Autumn King varieties start in September.

Summer Royal will remain the black seedless in the market, with a few proprietary varieties as well. The volume will stay moderate, with some heat damage slightly limited crop volume. Autumn Royals are still at least 2 – 3 weeks away. Expect blacks to continue in moderate supplies and allow to remain in the mix.

The tightest item of all, due to losing favor with consumers domestically and abroad causing growers to pull out too much acreage. The season has just started in a light way, but extremely low pallet volume coming out of the field. This is expected to remain tight and firm on FOB’s for at least a few more weeks. Even once a majority of the fields come on line, demand may still exceed total crop volume and keep FOB’s high. Avoid ad promos, just carry in the mix and expect it to stay costly.

The peach crop will continue on strong with good supplies, but the harvest last week was off 25 – 30% due to some heat damage and field concerns. Still, the quality is very strong. Continue to promote yellow peaches for the next 2 months. FOB’s will start to firm up slightly at the end of the month once volume starts to slow down and we move into September varieties. White peaches are light. Avoid promos this week until we see Snow Giant and Snow King around August 16th, then that will be the last push of white peaches for the season.

The last 10 days saw a glut of yellow nectarines of all sizes. This created a huge volume of fruit that was picked in late July. But things may change quickly. FOB’s will be aggressive for at least another 2 weeks, but the tide will turn. We will see some late August volume on the Fire varieties, but that will finish out in early September and should continue to see a mid-September finish like usual. White nectarines are in the same boat, with good volume to promote on white nectarine for the time being. Short-lived, though as we approach crop end in another 4 – 5 weeks.

Owen T black plum have finished and demand is strong, with light supplies of both red and black. Expect big plums to disappear as growers wait for Black Kat and Angelino in the next few weeks that typically produce a lot of 50 series VF. Be careful until then, FOB’s will firm, and supplies will remain light. Red plums are in slightly better shape with Honey Punch and Red Yummy still producing some big-sized fruit. Focus on reds for the time being until we progress into the last couple varieties of blacks.

Clem arrival is decent and on track with 2020 on both coasts, but the deciding factor this season has been quality. Quality from Chile has been off, causing some concerns at retail. Also, port delays between vessel releases has caused some gapping of availability on the West as importers wait for the fruit to offload. FOB’s will remain mixed, with some lower FOB’s on weaker fruit and better quality being slightly higher due to demand. Continue to promote, but be wary of quality from all COO’s until Murcotts arrive and bring the solid condition to the industry.

Extremely limited, especially on the West Coast due to the lack of countries outside of Chile and Australia. East Coast continues in slightly better volume due to South Africa. The Chilean crop is trending down 25% compared to 2020 which will hurt significantly on arrival volume. Demand will continue to exceed supply. 64’s and 56’s will remain very limited at high FOB’s. 72’s and 88’s will be a majority of the arrivals, but still, light there. Avoid ad promos on navels until the deal changes.

The lemon market remains stable, mainly due to light volume arriving from Chile and not in heavy volume. Still, supplies will continue to meet demand. FOB pricing has remained relatively stable compared to previous seasons and has remained strong. Expect harvest in Chile to continue along steadily and focus most arrivals to the East, while keeping the West in supply but not flooded. Crop volume will continue to harvest for the next 6 – 8 weeks.