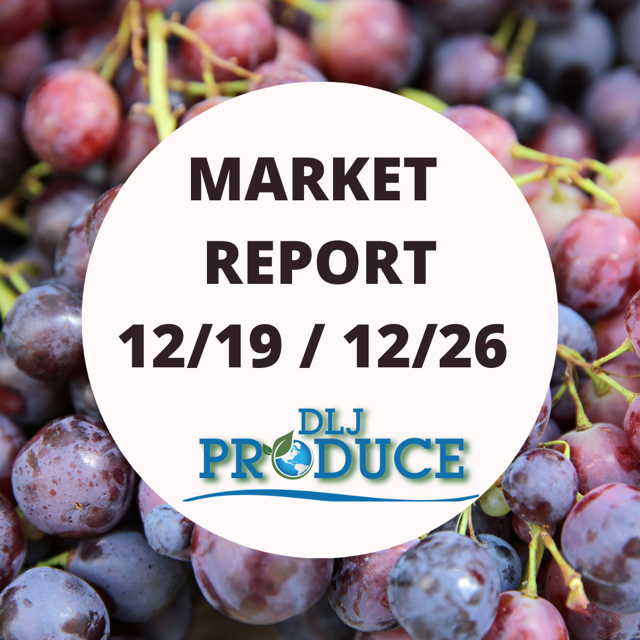 California is at its finish and it is time to switch into South American fruit. With the crop end, retailers will be looking to move into importing fruit to transition into fresh arrivals. A small amount of Peruvian Flames and Allison have begun arriving to both coasts. But arrival volume is expected to stay below demand in December and create a tight market on red grape supplies. Expect to not see true volume until Chilean fruit adds its name by mid-January on the West Coast. Peruvian civil protests will slow down arrivals in early January, so be cautious until volume picks back up.

The last of the California fruit has finished for the season. Time for import transition as volume finishes. Peruvian Thompson, Sugraone and Sweet Globe that have arrived to the US, mostly on the East, but this will slowly increase as more fruit arrives. Volume of early arrivals will see good demand as retailers switch into imports. Now is the time to make the transition and move into promotable volume in January, but the Peruvian shipment slowdown will directly affect the volume in late December and slow things down until Chilean arrivals hit.

The last of the CA grape crop is finishing this week as quality starts to fail. After CA finishes, there will be a noticeable gap as the first Peruvian and Chilean arrivals won’t be seen until mid-January. Plan for a small gap, but then good supplies once imports are underway.

Transition into imported Red Globes are fully under way, as CA is finished for the season. Supplies are limited and helping to keep FOB’s high at season start. Volume will pick up by mid-January on Peru and Chilean fruit will arrive in March.

Air shots continue to arrive on both coasts as retail pushes for promotions on imported cherries. The West will continue to see air shot arrivals through all of December, where the East will get their first vessel fruit inbounding around December 19th. West vessel arrivals are expected in the first of January when the break bulk vessels arrive. Promote with air flight fruit, for now, then the biggest promotional window of the year will be week 3 – week 7 as the prime-time vessel arrival volume.

Only a very small amount of early fruit has arrived to the East Coast by air. Due to cost and slight delays in harvest maturity, air flight fruit is expected to be very minimal as growers don’t see the value in flying smaller fruit. The first container arrivals will hit the East Coast by end of this week, but peak on small fruit like 56 ct trays and 60/72 size volume fill. The West will not see its first direct stone fruit until the first Chilean break bulk vessel around January 6th.

Similar to navels. Off to the races, size will increase. Fog will be the factor that slows down harvest slightly, but expect volume to pick out later in the day once fields dry.

Fog will slow down harvest some this week, but in general, growers should get at least half days in once fog lifts and dries. Harvest volume will remain good enough to continue promoting volume on navels. And size and quality will continue to peak going into January.

Central Valley fruit is coming on strong. Size and color are starting to peak, seeing a fair amount of large fruit size coming off the tree. Smaller sizes are more limited and being eaten up by food service and schools. Continue to promote all CA citrus as the volume will start to peak.