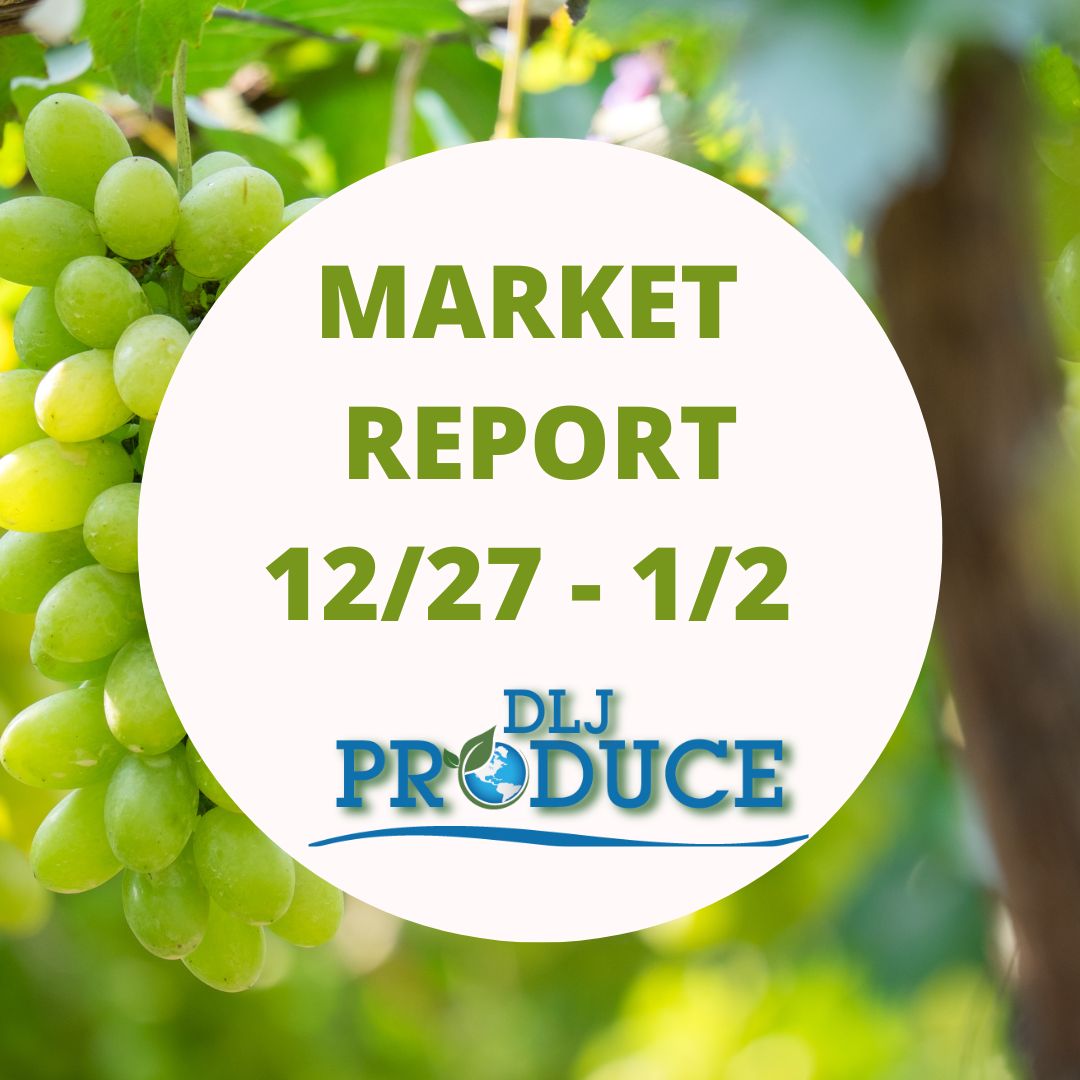 The California red seedless grape crop is finishing this week in small numbers, with the transition into full effect on the East Coast and starting on the West. Allison will be the finish of CA and the start of the Peruvian crop, with Sweet Celebration starting to arrive in the mix. Quality has been strong on the start of Peru, but numbers have been lighting as transition demand is starting to pick up. The first Chilean fruit to the West Coast will arrive on 1/9 on the first break bulk vessel, but will not gain volume momentum until mid to late January. Expect 2 – 3 weeks of lighter supplies, then volume will catch up for February promotion.

Very similar to the red grape in transition, but much tighter on demand. Supplies have been slightly less and demand from retail has been higher. This has created a demand-exceeds-supply situation that was expected for the start of the import crop. CA is virtually done finishing this week, which will make the transition even heavier on pulls. Peru is coming in a limited way with Sugraone, Sweet Globe and Arra15, with supplies ramping up but not fast enough. The first Chilean vessel to the West will bring some relief of additional product, but again will remain tight at least until late January due to demand. Promote in February.

CA is done for the season, as customers transition into imports. Small amount of early Peruvian black seedless on the East, but the West Coast will gap until mid-January for first arrivals. Expect Chilean fruit to be the first availability on the West, with volume not really picking up to promotable numbers until February.

Transition into imported Red Globes are fully under way, as CA is finished for the season. Supplies are limited and helping to keep FOB’s high at season start. Volume will pick up by mid-January on Peru and Chilean fruit will arrive in March.

The first vessel arrivals have begun to land on the East Coast and are moving at a good pace, compared to volumes arriving. The West Coast will see its first vessel cherry arrival by the end of this week, with large volume on the first break bulk vessel due January 9th. Air shots will dwindle as retailers look to promote off lower-cost vessel arrivals. The biggest promotional window of the year will be week 3 – week 7 as the prime-time vessel arrival volume. Get ready to promote as the wave of Chilean fruit is just starting to land.

Only a very small amount of early fruit has arrived to the East Coast. The first container arrivals on the East peaked on small fruit like 56 ct trays and 60/72 size volume fill. The West will not see its first direct stone fruit until the first Chilean break bulk vessel around January 9th, with one small container arrival this week as well. Expect the first boat to bring some volume of 48’s and 56’s in trays and allow for movement to begin for retailers on stone fruit.

Similar to navels. Off to the races, size will increase. Fog and rain will be the factor that slows down harvest slightly, but expects volume to pick out later in the day once fields dry.

Fog and rain will slow down harvest some this week, but in general, growers should get at least half days in once the fog lifts and dries. Harvest volume will remain good enough to continue promoting volume on navels. And size and quality will continue to peak going into January.

Central Valley fruit is coming on strong. Size and color are starting to peak, seeing a fair amount of large fruit size coming off the tree. Smaller sizes are more limited and being eaten up by food services and schools. Continue to promote all CA citrus as the volume will start to peak.