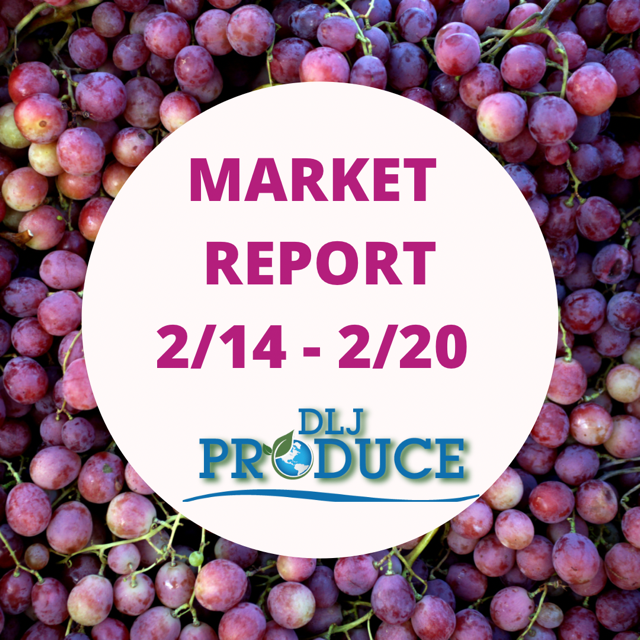 Both coasts remained tight last week, mostly due to vessel gap. This will continue early this week, especially on the West Coast, due a big gap. This has created an empty pipeline to remain until at least the end of the month. Once we receive fruit at the end of the week, orders will start to get filled and we expect to start seeing better arrivals of Chilean volume by the end of the month going into March. Reds are Allison, Timco and Sweet Celebration right now from both Chile and Peru. Expect the red market to stay tight on the West, but then volume will pick up quickly on arrivals and allow for promotions on red the entire month of March into April. That is where the focus needs to be to push volume and make up lost ad opportunities.

Green seedless are in the same boat as red seedless, and possibly even tighter on the East. Volume is expected to increase slightly at the end of the month going into March, but still be lighter in total arrivals then red seedless during peak harvest. Expect FOB’s and green seedless to remain higher and slower to decrease then reds, so focus in March should remain on red seedless ads for cheapest retail, with greens available to fill day to day movement. Still, by the end of February the West Coast will see increasing green volume from Chile. Peru is slowing down with Autumn Crisp variety on their tail end of harvest, while Chile is picking Sweet Globe, Thompson and Sugraone.

Black seedless look to stay very tight this week, with only limited arrivals of Midnight Beauty and other varieties arriving. Only a small amount will see the light of day to make it into the open retail market. Expect day to day supplies with some gaps between vessel arrivals until volume picks up. Then once Chile starts increased harvests, March looks like a good time to promote black seedless along with red seedless. Hold tight until volume hits.

Red Globes will stay non-existent on the West Coast. The lack of Peruvian containers means almost no arrivals. Any red globes in the US are destined to the East Coast, in limited supply. That limited supply is what is keeping transfers from East – West being feasible. Peruvian growers will continue to only ship seedless varieties due to the higher FOB’s and bigger demand, leaving globes on the vine or shipping to other foreign markets. Red globes will not get easier until Chile begin arriving with fresh harvest in mid-March. Chile still looks on point once harvest begins.

The 2021/22 import cherry crop will end this week. Only a small amount of vessel fruit is left to arrive by mid-week and should make its way through the system rather quickly. Inventories have remained minimal leading into the last arrivals. Air arrivals from Argentina will also end as demand starts to wain on the back end of the crop. Carry in day to day numbers until the finish, but avoid ad promos as it could end abruptly on availability.

Yellow peach are experiencing a gap on both coasts, with volume limited on arrivals of both white and yellow. Even with small amounts hitting, it is not enough to meet demand and will continue to see ebbs and flows of inventory between vessels. Avoid promoting peach for the next 10 – 14 days, but this should correct itself going into March.

With the lack of peach volume, nectarines have picked up the slack. Good supplies of yellow nectarine are available on both coasts in good size structures. Fruit is currently peaking on 40 series fruit, with some lighter supplies of 50 series and smaller volume fill. Focus on yellow nectarine, but decent supplies of white nectarine will remain available as well. This trend looks to continue for at least the next vessel cycle of 10 – 14 days.

The Chilean and US government have agreed to allow importation of Chilean plums using systems approach to avoid pest concerns. Due to the delay in decision and the final judgement just being made, we don’t expect to see the first arrivals of plums or pluots to the US until the end of February / early March. Half the season will already be over for the crop harvest. Hopefully volume will increase and allow for some shippable supplies of the late arrivals in March and April.