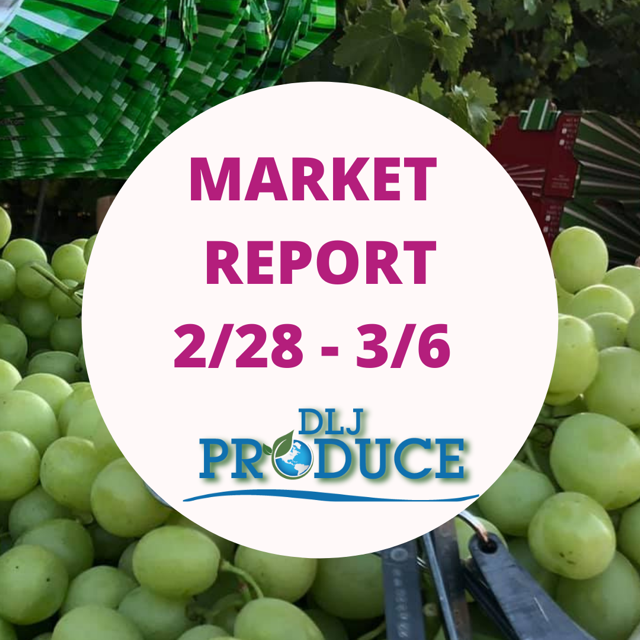 Now is the time to promote in all of March and into early April. Quality is strong on both coasts and good volume of Allison, Sweet Celeb, Magenta and Timco will continue to arrive. Volume will peak and allow for promotable supplies for the first time this season after two months of struggling. Promote and hit good in store builds of displays. Be wary of flucuations on FOB’s, as there is cheaper fruit in the market that is not deliverable. Good fruit will still hold decent FOB’s and continue to move through the system.

Green seedless are in okay arrival volume to both coasts, but higher demand then reds have kept pricing higher. Also, total crop volume is expected to come up lighter on the back end of the import crop. Sweet Globe, Sugraone and Thompson will make up the most volume for the remainder of the crop. Expect FOB’s to hold stronger then reds to slow down movement and allow retail to focus on red grape promotion. Expect supplies through March and then move into higher priced storage fruit in April.

The black seedless crop will finally start picking up momentum moving into March. Better harvest of Midnight Beauty and Sweet Favor will allow with increasing arrival volume. By the second week of March, the industry should be in a situation to be able to start promoting in a light way. Quality is good and will allow retailers to start mixing in the color break on grape displays.

As supplies of seedless grapes have started to increase, this has decreased pressure on red globes thanks to demand spreading out. Red Globe volume has increase slightly to help alleviate some pricing pressure. Some availability is present on both East and West Coasts. Expect supplies to remain available, but the best volume to be when Chile starts to arrive with its first fruit in mid-March.

Due to good harvest conditions, the Chilean cherry crop is stretching much further then typical. But this will hopefully prove the last week of arrival supplies. FOB’s will remain aggressive to force fruit through the system, but quality should be the larger concern. Time to pull the plug after this week.

Yellow peach remains tight on the West Coast. Light supplies come in on each vessel, but then quickly gap out between vessels. Arrival volume has been lighter then nectarine, hence the additional pressure put on peach. Continue to carry peach for day-to-day sales, but avoid ad promos. Volume should pick back up again slightly moving into mid-March before we reach the finish. White peaches remain non-existent outside limited arrivals. Avoid white peaches for the remainder of the season.

Yellow nectarine supplies have slowly started to drop off, but still, outweigh the current volume on yellow peach. Good supplies will continue to arrive, but slow down slightly between varieties moving into March. White nectarine has seen decent waves of fruit, as well, but that has backed off moving into March variety gaps. The focus on stone fruit promotion has been on nectarines allowing some good movement during peak harvest. Again, expect numbers to slightly slow down into March but hopefully see increasing peach volume to match up.