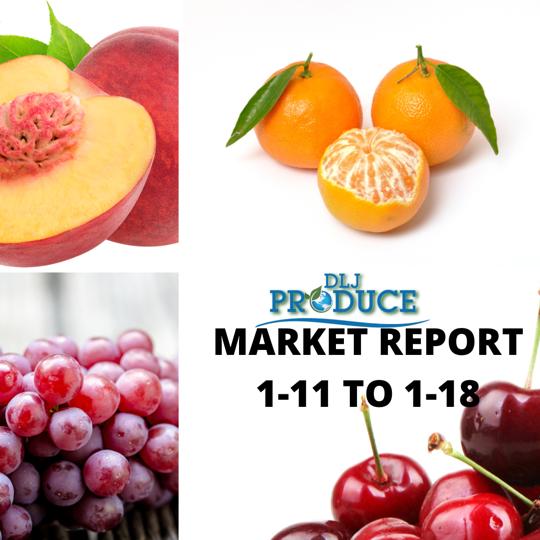 CA has finished for the season, with any remaining supplies having quality concerns. Retail has begun the transition into imported grapes to increase quality. FOB’s have remained slightly lower than historical averages on both coasts but may strengthen as movement increases. Timco, Allison, and Crimson will make up a majority of the volume from Peru for the time being. Arrivals will be slightly sporadic due to pier related delays plaguing both coasts, but supplies will still be available to move. Expect better volume once the first Chilean breakbulk vessel arrives around January 18th and brings in increased volume allowing for more availability in the market.

CA greens are in the same boat and will need to be pulled on any remaining inventory in CA. Import greens from Peru have arrived with good quality and will allow a smooth transition into imports. Arra 15 and Sugraone will make up the bulk of the volume, with some Sweet Globe also arriving. FOB pricing remains lower than in previous years, allowing for some early movement of Peruvian supplies. Expect better volume once the Chilean breakbulk hits mid-January and brings better supplies.

CA is finished on black seedless and Peru / Chile have not really begun in any way. A small amount of specialty black seedless varieties has begun to arrive in the East, but generally, the West Coast market is clean of any availability on fresh arrivals. This market is expected to remain tight to non-existent for the next 2 – 3 weeks until Peru begins arriving.

The transition is complete from CA to imports. Peruvian red globe will be the norm for the next 3 months before Chile starts arriving in April. FOB’s are high and look to be mostly stable through the entire season due to small crop volume and decent mixer demand.

This week saw a major gap in cherry availability on both coasts. Air flight arrivals have all but stopped due to vessels arriving. The only issues are the massive pier delays that have kept the vessel’s arrival cherries at the port and not getting released. This has caused a supply issue with very limited amounts on both coasts, not able to meet the ad promotional demand put in place by retail. Importers will impatiently wait to get fruit released ASAP, but this has put a big strain on the supply chain and will keep spot market pricing considerably higher than originally projected. Expect vessel arrivals to carry through the end of January.

Peaches are still very slow to start, with only light arrivals on both coasts compared to historical averages. A combination of the late start and pier delays has created a lack of arrival volume and only allowed for the day to day volume. Expect this to continue for the next 7 – 10 days until better supplies finally arrive on the first Chilean break bulk vessel. Even then supplies will be light and won’t allow for good-sized promotions to kick in until January.

Yellow nectarines have seen a vacuum over the last 2 weeks, as barely any supplies have landed on either coast. The pier delays have had little effect, simply because there has been not enough volume arriving yet from Chile. The record late start looks to have pushed volume way back. The demand-exceeds supply market will sustain for at least another 2 – 3 weeks, until Chilean vessels bring better supplies latter in the month and are able to fill the pipeline. Avoid ad promos until February when better supplies start to hit.

The plum crop will start in a very light way on the first vessel on January 18th, but neither coast will see sizable arrivals until late January once additional early varieties arrive. Expect to see better arrival volume going into February once strong varieties begin arrival. Better growing conditions and increased water availability in Chile should increase both crop volume, as well as fruit size. Plum volume will remain up, depending upon how demand reacts will determine FOB’s for the crop.

Good harvest week expected for clems as the wet weather and fog look to have passed by momentarily. This will keep good harvest volume in the market place and allow for promotions now through late April. Continue to promote.

Navel harvest will continue to hit a good stretch, with growers packing out well and keeping the market in supply. Higher demand has helped keep FOB’s stable and slightly higher than the historical average. Promotable supplies through May are expected and will allow for a good volume to sustain the movement. Volume is peaking on 56’s and larger, with some 72 and 88s

Our entire team at DLJ Produce is dedicated to serving our nationwide customers 365 days a year. If you have any questions or want to discuss our current produce commodity, contact us about the current produce market.