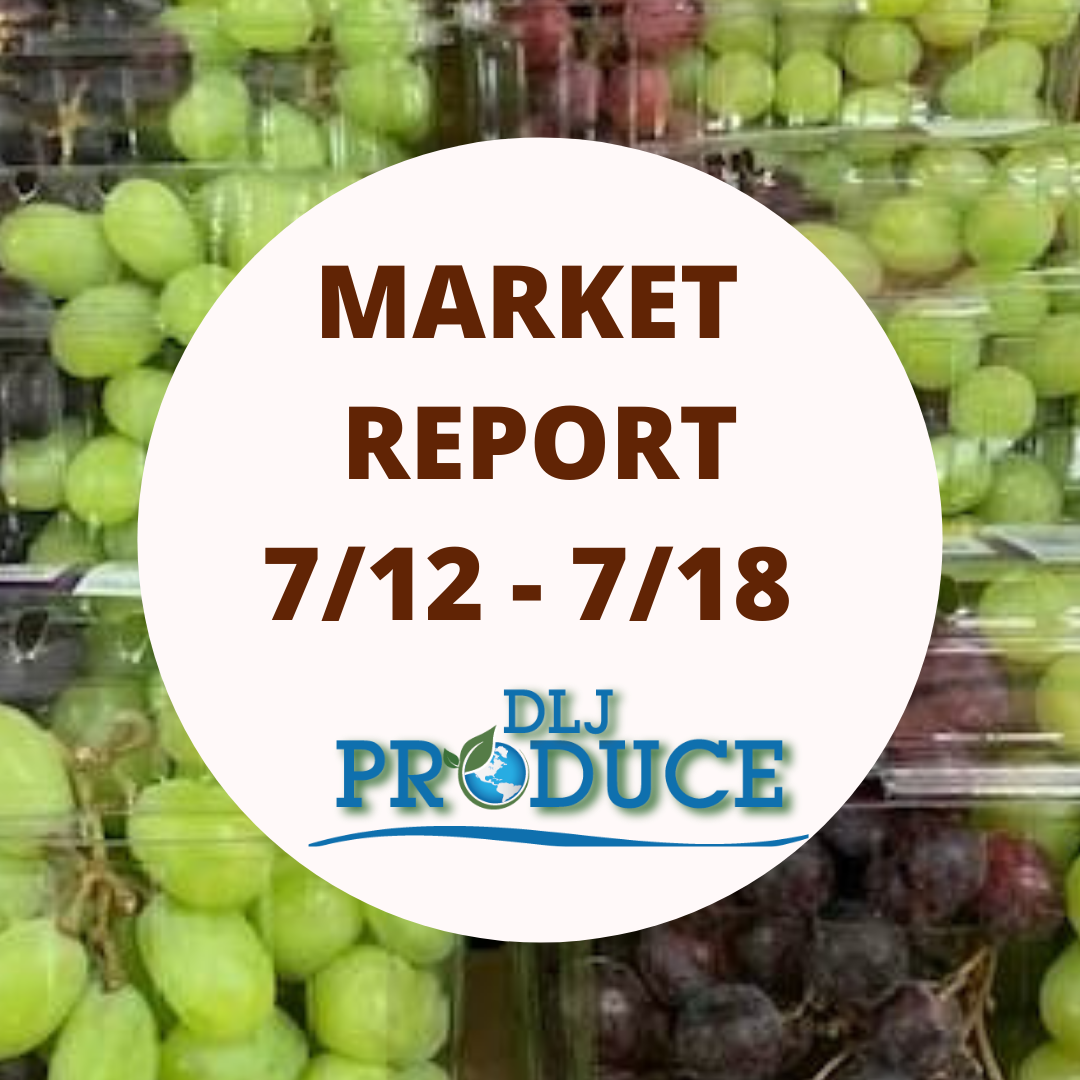 Central CA is finally in the game, as harvest officially started 10 days ago in Arvin. Mexico has finished for the season, as the last of inventory is cleaned up from coolers. Expect flames to pick up in early volume from Arvin, then transition into the Fresno / Madera area by the end of this week. Quality is strong and size is good, but the vines haves been fighting against some massive heat waves recently. The damage from heat may be a little too early to report, but only expected to cause some minor crop volume loss. Flames will plug on steadily for the next couple weeks before we start to see the first premium varieties harvesting in Delano in August.

Flames in Central CA got a head start on sugar and harvest, whereas green volume from Central CA has been slow to go. Heat has kept the green seedless crop from increasing on sugar, as the vines fight just to stay alive. This has stalled maturity on some Sugraone fields from Arvin and Delano. Hopefully, the sugars will come, and this should be the first week seeing okay volume on green seedless start harvest. Sugraone will be first in any volume, then followed by Ivory and Valley Pearl. Expect to see some heat related damage, but growers should do the job in the field to keep the pack right.

Central CA has also started on black seedless, with the first Summer Royal harvests coming out of Arvin. Quality will be good, but still fighting the same high heat on other varieties and struggling to gain momentum. Delano and Fresno / Madera will kick in to bring up harvest volume on blacks. Big volume will come in August and once we hit specialty varieties and Autumn Royal bring down the hammer.

Red globes are a problem. Heat in Mexico kicked the crap out of quality and volume. Also, the decreased acreage also affects total crop volume. Because of this, Mexico is going to come to record quick close to the red globe crop. This will not allow growers to bridge the gap before Central CA starts first harvest in mid-August. We anticipate a gap in red globe availability for at least 3 – 4 weeks. Plan on a gap.

Harvest has slowed down harvest days in the field, but good supplies remain on tree fruit. The main volume has been geared towards yellow peach, with white peach a close second. Continue to promote all sizes on yellow peach, as size slowly increases and leaves smaller fruit in the dust for the remainder of the season.rner..

Yellow nectarine and white nectarine have been more of a struggle, with growers seeing a lot less volume than yellow peach harvesting. This has kept supplies a little tighter and size smaller compared to peach. Expect to continue to see a $ 3 – $ 4 in spread between peach and nectarine pricing, as nectarines look to continue to trade higher.

Heat will be the slow down on the plum crop, but harvest has finally started to come on as we get out of early varieties and move into stronger fruit with better volumes. Both blacks and reds will increase in volume, but we anticipate seeing some heat damage that is unavoidable in 110-degree heat. Small amounts of pluot have started on early varieties, but we are still a few weeks off from heavy volume with Dapple Dandy / Dino Egg.

First clem arrivals are hitting on both coasts and volume will build quickly. We will see a combination of Uruguay, Peru and Chile at the start. Then Chile will dominate in volume by the mid-way point of the import season. Retail has already begun to transition and as California continues to wind down, expect movement to pick up over the next couple weeks. Sizing structure will peak on 3’s / 4’s / 5’s at the start, then move into larger fruit from Chile. Time to start promoting.

Small arrivals on both coasts to start, especially since CA still has a little crop volume left to move. But expect that to change quickly and see increasing arrivals of navels from Chile as we reach the end of July. Size is peaking on 64’s and 88’s, with some larger and smaller. FOB pricing will remain strong due to lighter arrivals and will not start making promotional price adjustments into well into August.

Only limited arrivals so far of all sizes, but increasing as we move into August. FOB pricing and demand have been high on lemons at the import start. This is also due to some of the CA regions slowing down or finishing and allowing for a higher demand on imports. Expect the market to remain strong until volume floods the market.