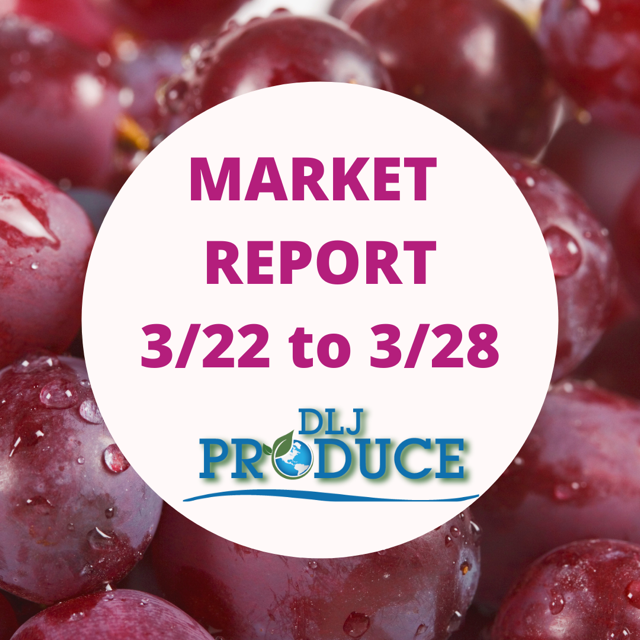 The next few weeks will see the largest arrival of imported red grapes for the season. This arrival, mostly from Chile, will allow for promotable volume and FOB’s to carry into April and allow retail to capture back some lost sales due to the tumultuous, weather based issues this season. Now is the time to promote while the getting is good. Timco, Sweet Celebration, Allison and Crimson will carry through the late deal. The Crimson may be the hero of the season, as it is most prone to hold up to rain damage. Even with good arrivals, we will see a split market based on quality. The best lots of red seedless will command more money and allow for good deliveries, where as there will be distressed fruit trying to work its way through the system.

We are seeing the end on the horizon for the green seedless crop. Some inventory has been stretched thanks to increased FOB’s slowing down movement, but total arrival volume over the next 2 – 3 weeks has fallen off the table. Only small amounts of green will arrive on each vessel and not nearly enough to meet demands. Also, quality will be a focus to the finish. Mostly Thompson, Sugraone and Arra 15 variety from Chile. Peru will finish with Sweet Globe and Autumn Crisp. Expect some availability next week, but in a light way. Availability will get very limited once we move into April and approach the April 10th marketing order. Avoid promos as mid-April could be scary and Mexico will walk into an empty pipeline.

Like the green seedless, the black grape crop failed poorly against the rains. Still, some arrivals will continue to hit over the next couple of weeks and allow some light to moderate supplies to be carried. Okay to continue pushing on black seedless, but expect supplies to clean up in April and finish quality. Especially pending how quality arrives.

The last of the Peruvian red globe crop will arrive and growers will look to move volume due to age on the fruit. This will allow some good supplies in the market place. Also, Chile has begun harvest and will bolster numbers on arrivals on both coasts. Continue to promote on red globes, as it will be one of the most promotable items along with red seedless.

The peach crop is nearing its end here in the US. White peaches are virtually done for the season due to weather-related issues. Yellow peach has a few more weeks to go, with a small bump up in arrival volume right here at the finish. This will allow for some yellow peach availability to carry to the end of the month but expect supplies to finish out quickly once we get into April.

As weather issues finish out the white nectarine crop for the season (unusually early), there are still ample supplies of yellow nectarine. The slow movement has plagued the industry since late February and caused inventories to swell. Now, quality is becoming a concern due to fruitage. Supplies will continue to arrive for the next 7 – 10 days, but with the current backlog, expected importers to continue to try to push nectarine sales into the second week of April.

Plum arrivals have been weak here at the home stretch due to weather. January rains caused significant splitting in red plums and the industry is seeing relatively light numbers. Black plums are in better volume and will allow for promotion through the end of the month, stretching slightly into April. But still, the decreased volume will create an early finish to the crop as movement pushed through the current arriving volume. Expect a mid-April finish, at the latest, creating a gap before CA starts.

Blooms have come and gone here in Central CA, with most early varieties of stone fruit (peach / nectarine / plum) having already dropped bloom and well into the start of fruit set. Some rains and hail in early March was not expected to cause serious damage, other then some natural thinning on the tree. It rained again this week, but again, with regular spraying and farm management shouldn’t greatly affect crop volume. But if we continue to see wet weather over the next few weeks, there will be concern over crop set and some bloom related issues. Overall, crop volume looks to be very similar to previous seasons and should allow for good promotion of stone fruit from Central CA. Chill hours have been ample and the plum crop looks to be a larger set then previous season. Expect peach and nectarine to start harvest by April 12th – 18th, with real harvest volume not until early May. Apricots will start harvest slightly after but have promotable volume sooner. The first of the plum crop won’t be until early to mid May and likely see a gap after Chile finishes.