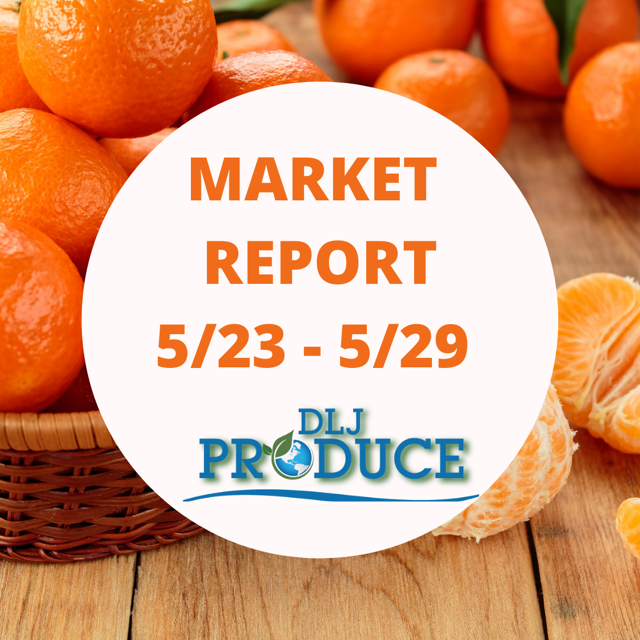 Grapes, Tree Fruit and Citrus Market Report May 23 to May 29

The last of the Chilean red grape crop has arrived on both coasts, with importers still working to finish out the last of the crop for the season. Larger inventories remain on the East then the West. Allison, Crimson and Scarlotta will finish out the crop for the season, with growers and importers pushing to clean up. Coachella and Mexico have just begun harvesting Flame red seedless and will finally start to hit some momentum this week as more fields start coming into production. Still expect supplies to be a litter lighter then usual, until we get into premium variety fruit going into the first week of June. FOB pricing will start high compared to the Chilean crop, then sharpen up going into the first to second week of June with promotable supplies.

This will likely be the last week for Chilean green seedless on the West Coast. The East remains heavier in volume on remaining storage lots of Thompson and Autumn Crisp. But supplies are expected to wind down rather quickly. Coachella is yet to start harvesting any green seedless in volume yet. Mexico has begun to pick up steam on Perlette and Early Sweet varieties, with Sugraone / Prime right behind it. FOB’s have begun to adjust as Mexico competes against the remaining Chilean fruit on the East Coast. Promotable volume has already begun to hit and will continue through all of June as Mexico transitions between varieties. Now is the time to start making the transition to push volume on Mexico.

The Chilean black seedless crop is done of the West Coast for the season, but some supplies still remain on the East. Mexico will just begin harvest this week on the earliest black seedless fields picking some Summer Royal. Expect this volume to gain steam once we reach June. Most retailers will look to transition once they make the switch on red and green seedless, so movement is expected to be good.

The Chilean red globe crop is sputtering along, with some late arrivals to keep light supplies of fruit in the system, but not enough to meet projected demand through the gap. Expect to see some limited availability for another 2 – 3 weeks, then the crop will finish. Gap is expected to be large, as Mexico won’t start harvest until late June on globes. Be cautious on red globe and only use as a filler.

Arvin and Kettlemen are done for the season on their early crops. Harvest volume will move up to the Central Valley and start picking up momentum. Growers are expected to start with some solid varieties this week, helping to bring some volume to the industry. Expect to see increasing availability, but some of these varieties were hit hard by hail damage decreasing volume in the field. White peach will also continue to gain steam as more harvest volume comes into production. Demand has remained strong, so far, so expect fruit to be available but at higher FOB’s then usual. Fruit size will continue to peak on 56’s, with some 64’s and 48’s.

Warmer weather should bring on the first nectarine volume of the season for yellows. Zee Fire variety is just getting ready to start in Central CA and that will bring welcome relief to a rather dry pipeline. Demand has been high so far, keep availability limited as we transition out of the south Valley. Zee Fire will peak on 56’s, with some 64’s and 48’s, but limited on anything larger. White nectarine has been hitting a better slug then yellow on harvest and has allowed for some early availability on both colors. By the end of the week, supplies should have corrected itself allowing for better nectarine supplies going into next month.

Apricots remain a struggle. This is mainly due to the freeze and hail damage that limited the crop. Growers are already into Roboda and Lorna varieties that throw very big fruit, but we have not seen the growing wave of inventories that we typically see on apricots. Supplies are currently demand exceeds and expected to stay limited. Avoid apricot promotions due to lack of stable availability, as it is better suited for day-to-day business.

The first black and red plums of the season have started in a minimal way, peaking on 50’s and smaller. Quality is average at the start, as the first varieties of the season tend to over mature. Pluots will be right behind this and start some early blocks leading into June. Mid-June / July / August / September are typically your biggest volume months for plum harvest, so we have a little time before we are really off to the races. FOB’s will remain very high at the start due to limited harvest, but expected to drop leading into mid-June. Expect a lighter crop due to hail damage on some varieties.

The CA cherry crop is almost finished. Growers are still picking and just moving into Bing variety in the Lodi / Stockton area… but the freeze, rain and hail damage have really taken their toll. Harvest volume will drop off significantly starting May 25th and most growers are anticipating only another 7 – 10 days of harvest. Be careful for Memorial Day, as we really expect to see a demand-exceeds supply situation as the CA crop fizzle out. Washington will likely see a small gap before they start picking in volume.

Chile and Peru have just begun harvest and starting to ship volume of easy peelers abroad. The first container vessels will be getting on the water shortly, as the CA crop ends. Moroccan clems will need to fill the gap, as the first arrivals from Chile are not expected until the 2nd – 3rd week of June on the West and promotable volume is not expected until July. Expect a tighter market in June with higher FOB’s then typical due to the limited amount of import fruit arriving. Chile looks to be down 34% on total estimated volume, so this should keep the reason relatively snug.

First orange harvest is still a way off. Chilean and Australian volume to the West Coast is not expect to start until July. CA harvest will need to stretch another 1 to 1 ½ months to help bridge the gap. Total orange volume is down 13%, so expect slightly higher FOB’s there.

CA is still going strong, so the first lemon arrivals from Chile, Argentina and Uruguay are not expected to start hitting in volume until July. This will give the CA crop time to clean up and create a better market for imports. Even with the new countries shipping to the US, the Chilean volume will be down 10% so that may help keep the market more afloat. Finish with CA and expect and July transition into imports.