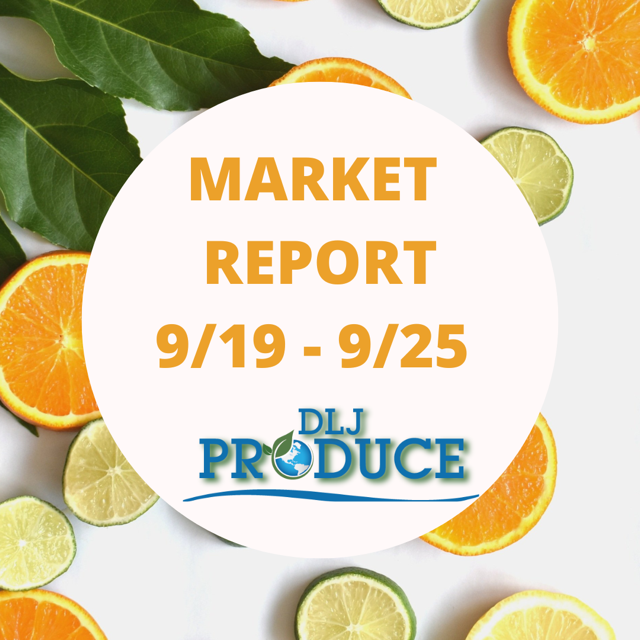 Massive heat wave… now rain. The grape crop cannot catch a break this season. Damage will be pending seeing what fields are covered and what was able to get through canopies. Scarlet Royal, Sweet Celebration, and Jack Salute are the flavors of the month. Crop volume will fall, but mostly at the end of the crop in November and December. Continue to promote for the time being until growers move into late-season varieties and finishing crop volume can be assessed. FOB’s will slowly start to rise in October.

Like the reds, green will take more damage with sunburn and heat damage. Timson and Sweet Globe will wind down, as growers move heavily into the Autumn King crop for the balance of the season. Autumn Crisp will still be a way out and at big export money once they start. Expect both to come up shorter then expected and create demand for import fruit for mid to late December with the crop winding down short of a strong finish. Expect FOB’s too firm quicker on the green as growers look to move good fruit at a premium at the finish.

Black grapes continue to hit a gap period due to the heat and variety of timing. The start of Autumn Royal has been slow and not in heavy volume yet. Volumes have been light lately, so Autumn Royal will come at a great time to bring supplies back into the system but have been slow on the trigger to get going in volume. Expect a late November / early December wind down on black seedless.

Red globe prices will remain higher then seedless, even when the volume has picked up and we hit the peak of packing in the Central Valley. Expect supplies to carry, but with the heat wave, likely an earlier finish in late November / early December and create an opening for the first Peruvian arrivals in December.

The rains may have finished the peach crop out. Another 3 – 4 weeks were expected of harvest with the major players on the late crop, but the recent rains post heat wave may force most fields to pull the plug on the remaining crop. Time will tell, but in the meantime, it is advised to add on any late-season promotion at the finish line. December for first import arrivals so there will be a sizeable gap this season.

Done, as only scraps remain.

We are on the last varieties of plums and the heat damage has taken its toll. Angelinos are the only variety left in any volume, as late-season red varieties peter out at the finish. Crop volume is extremely light this season and will put the crop at a late disadvantage for volume. FOBs will remain historically high at the finish, driven by demand and crop availability at the finish. Avoid promoting, if possible, and use only as Fall fills and color break until crop end.

Murcott will reach the finish line as the main variety as they reach the tail end of the crop. Volume has already begun to drop and will continue towards the end of September. Chile is expected to remain roughly 36% off on export volume over the last few months, with Murcott trending down roughly 10%. Expect the late September arrivals to not stretch far enough into October to meet demand. October will be demand exceeds on easy peelers as the supply chain cleans up inching towards the start of Central CA. * Last break bulk is roughly September 21st to the West, expect a quick finish/gap before CA.

We are hitting the watershed moment for the imported navel season. Crop volume from Chile remains off considerably due to the freeze loss. That effect will be felt now, as arrival volume will wind down extremely fast since growers do not have fruit on the tree to hold back for the finish line. Because of this, supplies in the US have decreased quickly and will begin to approach a demand-exceeds supply situation moving into October. Demand will remain strong, so a gap in supplies is inevitable. Prices will jump at the finish line and come up short, only expected to stretch into early October. Avoid promoting and get into Central CA as soon as possible. * Last break bulk is roughly September 21st to the West, expect a quick finish/gap before CA.

Lemon harvest is complete in South America, with an early finish on the crop volume affected by the freeze. Expect supplies to dwindle over the next few weeks. Avoid promotions in late September and expect FOB pricing to continue to firm over the next 3 – 4 weeks as supplies finish. There are still some CA lemons left from District 2, but expect a gap between the finish of imports and the start of CA District 1. * Last break bulk is roughly September 21st to the West, expect a quick finish/gap before CA.