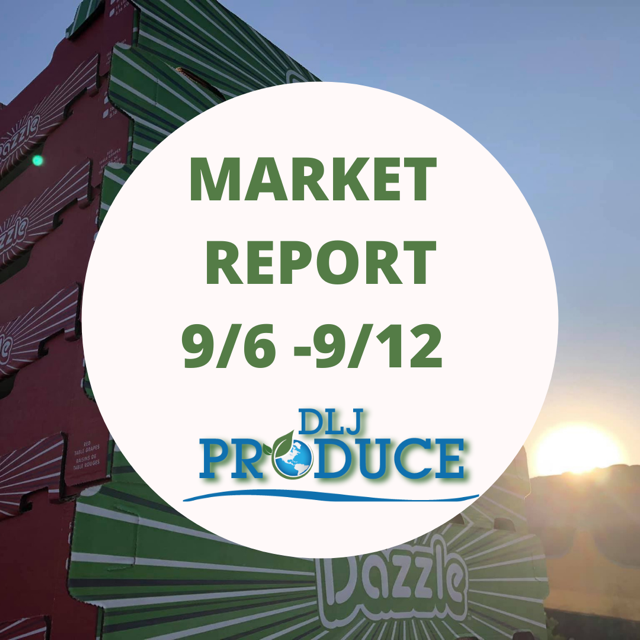 The red grape crop saw decreased volume in much of August, but the tide has started to turn with more fields of Scarlet Royal, Krissy, and Sweet Celebration come online. Demand remains good and is keeping the crop moving. Some heat damage can be seen, especially in certain varieties, but field crews are doing a good job of getting the quality right in the pack. Expect red to come on with volume and carry into November on volume, and stretching the crop into mid-December. Promote moving forward as we hit peak crop harvest volume.

The green seedless volume will start to back off, as the volume of Ivory and Sugraone have passed and are winding down. Great Green and Pristine will come on strong over the next few weeks, but the peak volume of the season is past. Now will be a slow decrease in total volume. Quality is remaining strong, but a weak market has created some shippers with older inventory and trying to move weak lots. Expect the market to remain momentarily weak, then firm up in late September as we move into the last main varieties of the season with Autumn King and Autumn Crisp.

Summer Royal and Midnight Beauty are winding down on availability, as growers clean up the last of the crop. Black grapes will remain relatively tight for the next 7 – 10 days as we wait for Autumn Royal to begin harvesting in volume. Even with lighter supplies, black grapes will still remain available until the harvest volume picks back up. Carry in day-to-day volume until mid-September.

The red globe market still remains hotter (and higher-priced!) then the seedless market due to decreased crop acreage. With more volume coming into harvest, expect FOB’s to drop slightly, but they will still remain at record highs as the crop is expected to move well and clean up easily.

We are on the back stretch of the peach crop. Growers will start winding down on the last of the white peach and finish by mid-September. Central CA growers will pick the last of their yellow peach crop and wind down relatively soon. Harvest will continue with only a handful of growers split between Central CA and Arvin. Expect FOB pricing to slowly start to firm as harvest volume decreases. Expect supplies of trays to be the focus until mid-October, with volume fill being lighter due to fruit size peaking at the finish.

Almost done for the season. The last few varieties of yellow and white nectarine are being harvested this week and will only allow the season to stretch into mid-September. Expect a quick finish, even with current higher then normal inventories. FOB have remained aggressive up to this point and look to remain that way to the finish. Avoid ad promos, as we only have another 7 – 10 days left before we get to the finish of the season.

Black Kats and Angelino are picking on black plum and have increased the volume coming out of a gap. But due to a light set and smaller fruit size, 40 series fruit will be limited to the finish, with fruit now peaking on 50’s and smaller. Red plums will stay slightly larger on size, then see a big size increase as growers pick the last volume variety of the season with huge Flavor Falls. FOB prices will increase on both colors as we move to the tail end of the crop. Expect both to carry, at least, until mid-October or later.

The clem market remains extremely demand-exceed, due to a multitude of combinations from the port. The transition on varieties from Chile hasn’t been smooth, as well as volume slowly increasing on harvest of Murcott variety. The ports of Long Beach have seen the largest pier delays in history, with a majority of the fruit sitting out in the water and not released. Due to the pier delays, there is almost zero fruit available in the market on the West Coast, with importers having to pull ad commitments due to having no fruit to pack. Avoid clementine promotions for the remainder of the import season at all cost, as supplies cannot be guaranteed and FOB pricing continues to spike due to demand.

The navel market remains very limited, especially on 64’s and 56’s. Size continues to peak smaller, with good volume on 88’s. Demand is keeping larger sized cleaned up and relatively tight. Luckily, increasing arrivals are expected at the end of August. This may help take some pressure off larger fruit and at least allow for some supplies of navels to be available. Expect FOB prices to only adjust slightly once arrivals hit, as demand is expected to remain strong.

Import lemons remain a tighter item then seasons past. Due to a combination of lack of domestic fruit and good demand for the product, imported lemons are seeing a strong pull so far this import season. Reports on FOB’s show this season being the highest-priced returns back to South America in the last 5 years. FOB’s have slowly started to adjusted due to some pressure from Mexican fruit, but still not as drastically as the previous season. The market will remain relatively stable as arrival volume starts to slow by the end of September.